BestASPNETHostingReview.com | Best and cheap Windows Server R2 hosting. In an enterprise setting, server failures are never an issue to be taken lightly. Since servers are the backbone of most modern operations, being able to pinpoint the cause of errors rapidly is an essential skill for any Windows server administrator. Fortunately by following a few simple steps you can easily pinpoint the cause of most Windows Server errors.

One of the most important debugging tools within Windows is the kernel crash dump file. This file typically contains all the information necessary to pinpoint the cause of a server issue. Unfortunately this feature isn’t configured by default, making it crucial that you enable this feature before experiencing issues.
To enable this feature, follow the steps below: 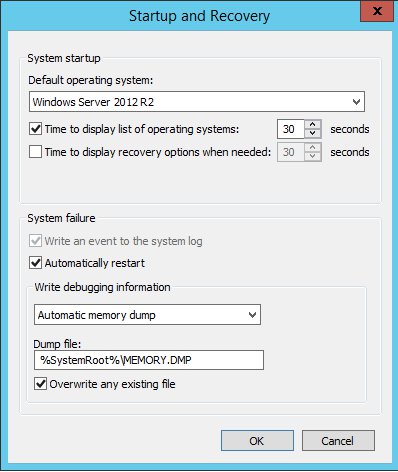 After configuring the Windows crash dump settings, you will need to setup Windows to enable your keyboard to cause a system crash.
With PS/2 keyboards, you must take the following steps:

With USB keyboards, you must take the following steps:

To help with common issues that might come up as a server administrator Microsoft has released multiple debugging tools to make the job easier.

The Sysinternals suite is like a Swiss Army knife for your troubleshooting efforts. This collection of seventy tools maintained by Microsoft ensures that you can easily pinpoint the source of virtually any error and take action accordingly. While this suite is best installed on a thumb drive to be used when errors occur, you can also load this suite on your servers early on as a proactive measure.

While there are many tools within the suite, there are a couple which you should keep on mind;

Since RAM is one of the most used components of any server, many system failures often are due to memory-related matters. While typical memory issues involve applications using too much resources, or a process running out of control, failing hardware also can be responsible for system crashes. Fortunately you can easily diagnose potential memory trouble spots by using the Windows Memory Diagnostics tool built into most modern Windows Server editions.

The Importance of Backups

Even with the best tools and skills, occasionally a professional will encounter an issue which is beyond repair. When situations such as these occur, having a solid backup system always pays off. Although there are many backup tools on the market, Windows has a backup tool built in which can be used to protect yourself from even the worst disasters.
For details on implementing Windows Backup in windows Server 2008 and Windows Server 2012, Microsoft has documentation here.

Clustering as a way to Mitigate Risks

Server clustering is the process of having a group of independent servers working together as a single system to deliver more reliability to your users. Such arrangements are designed to protect against the following types of failure:

Although there are many variables which impact the reliability of your Windows servers, by focusing on proactive actions to mitigate damage you can avoid the difficulties of troubleshooting server issues. Even with the best precautions however, failures still occur, which is why you should familiarize yourself in advance with the technologies Windows provides to make the debugging process much easier.